I keep getting indications that writing a book is on my life path…. I accept that, however, knowing just what to write about is the next step. The only thing I can think of is to write about what life has been like for me over the past 7 years. Things I never expected to happen on every front of living, have happened. It’s a strange/interesting path of heart crash and burn on what feels to me like a massive scale. Phoenix Rising. I think I’m standing somewhere on the upper half of the mountain that I’ve been metaphorically climbing. Groping through the inner fog, the rain, the sleet, the snow, the scorching sun, major winds that nearly blew me off the mountain…. I must be somewhere above the treeline by now. Today, feeling a sense of calmness, the silence is deafening here. Even the air around me feels smooth. These are things that I haven’t felt or sensed, ever in this lifetime. Spirit has been guiding me all the way. Maybe it would be interesting to others? Maybe there are things to share that allow for connection and to say “whatever you’re feeling, experiencing, raging with, you’re not alone. You have others on that same path right next to you doing the same damn thing, growing, changing, getting closer to an open road.”

Lately I’ve been turning to the Earth and First Nation essence of living to commune with. This last weekend I heard far too late about an event to herald in The Black Hills Initiative in South Dakota. A return of the land back to the original keepers. Musicians (native and non-native), Elders, and Leaders young and old alike, came together to celebrate together this changing time of Going Home. I so very much longed to be there. So, since the means were not available, I chose to hold the same Spirit and Celebration here where I am. I went to the Salish Sea at my particular spot near Semiahmoo in Blaine Washington. I met with the Ocean. I danced, played my drum, ankle bells, flute, sang, and made offerings of Solidarity and Love to the Spirit of the Earth, Sea and Sky. At some point, these solitary treks will be made with others. For now, I go on my own.

Building up my Spirit Bird Intuitive Arts healing business, I’m finding my healing henna tattoos are well received and finding their place in my skill set. The henna came in to my mind this past winter. I realized that I was receiving images in my mind’s eye. I was drawing them in my journal and a few made it into pastel forms on paper. But then I was feeling the need to put it on my arms, feet, body. I discovered that the images created themselves. My intuition saw step-by-step what to draw. Afterward, I was able to read them and found that what was drawn, had energetic presence. I felt different. I noticed that the days and weeks that followed were in-keeping with the image stained on my skin. I was healing physically and my heart was healing emotionally, consciously. I brought this to two fairs I participated in as a healer this summer. Some very powerful images came through for people brave enough to sit with me.

Toward the end of the summer, I happened to break a bone in my foot. (I was jubilantly dancing!) A few days later, I applied a tattoo over the break. The next morning my foot was without pain. I have also been working on my foot from the moment of the break, energetically supporting the bone to heal. I’ve been without a boot, without medications or crutches the whole time. I did try wearing the boot and crutches, but they only became hazards, so I wore sturdy shoes instead to get around. Then barefoot. The break was 4 weeks ago and the foot is nearly done with healing. Maybe I was given this break to prove to myself that the power of healing flowing through me is real. Sometimes I need proof. The tattoo in this post is one of the most recent ones, having to do with my own energetic evolution, and the solid support of Spirit, evidence showing up in a variety of ways in my daily life. ….and writing. hence this post and those to follow. I guess it’s not enough to post tweets and comments on facebook… (Spirit Bird Intuitive Arts and Erika Rado on Facebook, and @ErikaRado on Twitter.)

I’m gearing up to start teaching creative projects to kids in town. We’re working on the art of Australia, and I’m including music and rhythm for us to explore with homemade instruments. A new year, on my own, doing things I never thought I would do. Feeling calm and supported by Spirit. Rising up!

Blessings to you, wherever you are on your path. Keep it real and let it be.

One thought on “A full year later…. Posting from a new Life Perspective” 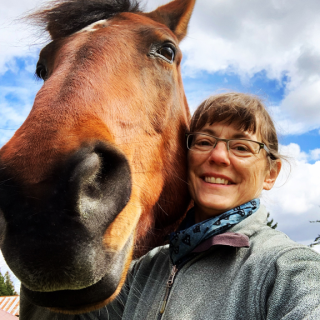 Erika is a professional intuitive, fine artist, and educator for people and animals using ancient and familiar methods of communication. She also facilitates unique consultations through the medium of pastel painting (similar to tea-leaf reading with a fine-art twist). With this, she is able to address client questions and awaken solutions. As an animal communicator, Erika provides intuitive support for you and your animal companion by facilitating clear communication between you for any concerns you may have for your pet. She offers relational horsemanship for those who seek a deeper connection with their horse, utilizing interactive, embodied presence, and subtle listening skills that is natural to horses. Find her on Facebook: Spirit Bird Intuitive Arts; and Peaceful Horse. Instagram: @spirit_bird_intuitive_arts; and @peaceful_horse. Patreon.com/Peaceful Horse for those interested in becoming a monthly supporter for the community project!